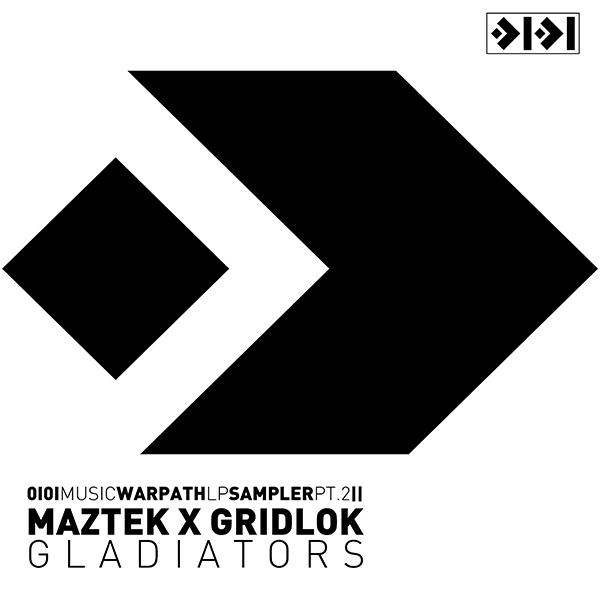 The number of collaborations Maztek has included in his forthcoming ‘Warpath LP’ proves just how formidable his legacy has become throughout the entirety of his career. And up next from the producer comes another insight into an album which not only stands as one of his biggest feats to date, but also a monumental release for his newly created imprint 0101 Recordings.

Forthcoming next from 0101 Recordings is his second LP sampler, featuring both his inspiration and long time friend Gridlok. With their careers having aligned over recent years, they decided to bring together their joint musical aptitudes to deliver a cut throat track which is a force to be reckoned with, instantly recognisable from the global club circuit.
The name ‘Gladiators’ was an apt choice, pointing to Maztek’s background, having grown up in Rome and drenching himself in its rich musical culture. This can be seen throughout the LP’s next sampler, which features a range of different drum tempos and strident levels of percussion. Every static crunch of LFO pulses heavily against the mix, whilst the track peaks and troughs between its dancefloor appealing hooks. Each beating stab of bass weighs an imposing structure against the track’s composition; throughout its entirety it doesn’t lay on the brakes, pushing harder and harder until you’re fully overwhelmed by its direct power. Together, Maztek and Gridlok prove they are a formidable force, still causing absolute devastation years on from their very first outputs. Although this comes as no shock, as when you combine the joint talent pools of both artists only a track like ‘Gladiators’ could be the outcome.
Having already released on the likes of Renegade Hardware, Hospital, Virus, Commercial Suicide and Eatbrain, it was time for Maztek to fashion his own creative hub. With ‘Gladiators’ only being its second release, 0101 Recordings is making its mark. Alongside his combined single with Aeph, Maztek shows that ‘Warpath’ will signify just how imperative he’s become within the world of drum & bass. Not only has he set a benchmark, but he’s also help to redefine the prototype of releasing music. Maztek is pushing forward on the wave of independent artists dropping their own tunes – and ‘Gladiators’ exemplifies the standard being released.

Feeling this! Nice one :)

Good one, thank you!

holy shittttt this is fresh as fuck

Proper marching tune-so good I had to play it twice

love this one, thx

Full support on this one. Love the clash of the styles. Really awesome tune guys!

Nice one guys. Thanks!

I really love that oldskul stab-riff and how dirty the track is. Stands defy out of the generfic stuff that is being released everyday. Will test tonight, thanks for sending!

Yes!! One of my favorites off the forthcoming LP - a massive stormer!