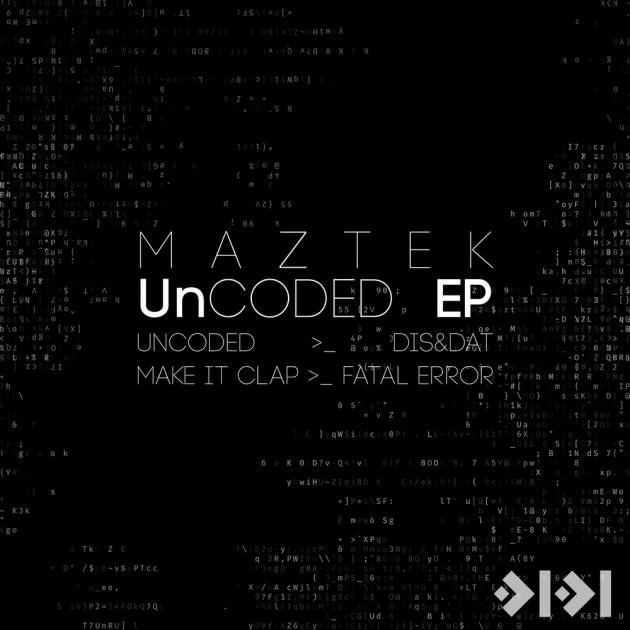 The machine is continuing to run after the release of Maztek’s colossal ‘Warpath’ LP. Following the musician’s most monumental achievement to date, ‘Warpath’ signified a new beginning for Maztek, one where he’d have full creative freedom over the music he spent years meticulously moulding within his studio through 0101 Musics. And it’s a studio which has laid claim to some of Neurofunk’s most definitive pieces; a legacy that’s still pushing the boundaries following Maztek’s most recent LP, alongside the remixes which have helped to add yet another dimension to his craft.

If the reworks of Maztek’s pivotal ‘Warpath’ LP weren’t enough to whet your appetite, he’s about to unleash four brand new cuts which signify why he became a genre great during the epitomic explosion of drum & bass. Including two dancefloor records, as well as half-time experimental numbers which will lend themselves to the abrupt edge of any DJ set, Maztek certainly delivers with this next release. Although this was to be expected from a label spearheaded by an artist held in such high regard, whose album rose to critical acclaim across the dance music spectrum.

The EP’s opener ‘Uncoded’ begins with ticking atmospherics, which slowly lead you into your peril as you’re dropped down a climatic chasm of punching drums and snapping beats. ‘Dis & Dat’ is more lumbering in its patterns, stepping between a carefully laid out composition and a growling bassline. Then ‘Make it Clap’ lends itself to 0101 Musics burgeoning diversity, one which is beginning to seep its way into every layer of the drum & bass fabric. It’s shifting subs and clinking breaks pull you deep into the mix, as it crashes formation after formation. The final attack is done through ‘Fatal Error’, which again is brooding in its intensity yet still hits on target again and again as it begins to become almost overbearing. It adds an uncertainty to 0101 Music; it’s an uncertainty which heralds the imprint, proving that they’re not here to stick to any one prototype. Instead, they’re here to define themselves in their own right and ‘Warpath’ proved to be just the beginning.

peak neuro has been reached

Techy as usual... thanks!

Flexing on all fronts!

Sickness! Great to see Matteo firing on all sides!!! <3

Maztek is smashing it

Maztek can do no wrong. Love this!

wow!! what a massive EP

Whoa! Crazy to say this after years of being a fan, but I think Uncoded just may be my favorite Maztek track ever...HUGE! Expect full support across radio, podcasts, guest mixes and live sets. Cheers!

Great release, sounding fresh and some original sound design across the release. Huge synth work on Uncoded and full of energy. I'll be supporting in full on my Kool London show and in my club sets.

mine su mine! Bigup Maztek

Thank you for this EP Maztek! I'm happy to hear you return to your classic, cut-up glitchy sound I love so much with Uncoded (i felt it was missing was from a lot of your recent output). Fantastic EP!

This is just great! What a gorgeous Ep! Dis & Dat is INSANE!

One of the advantages of a self ran label like Maztek is doing, must be he can get releases out when he wants and that creativity isnt held back here, Ive not got over the album yet and Maztek follows up with these naughty tunes, Uncoded is gonna get so much play!

Maztek smashing every single one.

Was looking for some Decent Beatz this week. And Maztek always delivers with top notch production. Keep em coming 🤘

uncoded is a beast!!! great groove all over! grazie

Love this ep what i would call organised kaos